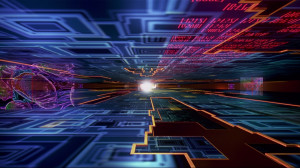 Over two decades ago William Gibson coined the phrase cyberspace. Most consider that term today to mean the Internet and online games. However that is not actually as Gibson described it. Cyberspace is more of a virtual landscape that corresponds in relationship to that of the physical world. So if you are sitting at home and want to go check out your bank account you put on your VR and walk or fly down the street in cyberspace to the location of your bank to access your account, you of course physically are still at home.

Of course the actual Internet is a lot of more convenient when it comes to say banking then the one envisioned by Gibson, but it doesn’t mean his vision was wrong. The vision of Cyberspace was to emerge in the early to mid 2010’s, that is now and guess what, that technology is actually emerging today. So Gibson may have been fully correct in his futuristic predictions. 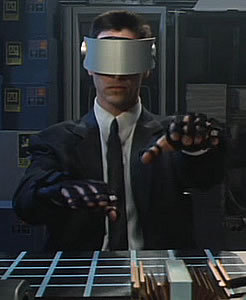 Why would we want this style of Cyberspace? It is all about the new technologies of Augmented Reality (AR). Now with GPS, WiFi, Google Glasses and other technologies such as VR to AR with the Oculus Rift, augmented reality is about to become the next big thing–depending on market demands.

The other key factor that will shape Cyberspace in the next few years in the flood of cheap micro computing. Tiny computers with built in wifi/RF and location that are very cheap that can be put into the wild. Store owners can install several of such devices in their store that will signal specials and where things are to customers as they move through the store using AR devices.
Even cheaper alternatives can be applied as well to go with AR that include QR codes and other types of even invisible to the necked eye watermarks on signs and billboards that only the AR devices can pick up but signal the device to show holographic images, movies, play sound tracks and all kinds of things including interactive games.

Going back to the banking idea above, we can imagine when we walk into our bank we are instantly and securely connected to the banks cyberspace and you maybe greeted with a virtual teller or someone in loans, not that you may even need to goto the bank, just like with the Internet you can goto the banks cyberspace without actually being there but your presence would be recognized as you were there for talking with a real in house agent for say getting a bank loan.

You and your significant other want to dine out tonight on the top of the Eifel tower without leaving the home. Cook up a good meal, set down and throw on your cyberspace devices and your experiencing dinner on the Eifel tower in real time.

Reality is soon to change, Cyberpsace is near.