Attack Hoaxers and Fakers for Profit and Click Herding (DEBUNKED)

On June 3rd 2017, reports came out of a van running over people on London bridge and then three men getting out and stabbing people. Eyewitnesses said the men were all Muslim and shouting to people as they stabbed them “This is for Allah.” This is just the latest in many such events happening across the world by fundamentalists and extremists, especially when talking about the Islamic extremism.   However as with the stabbings in Portland metro man who stabbed and killed two nom Muslim men for defending a Muslim woman, the hatred and violence is not limited to just one side. Regardless of the situation, there is a disturbing trend within online media of labeling every incident as “Fake”, “Hoax” and “False Flag”.

At a time when the US President often calls news agencies he does not agree with “Fake News.” A culture of discrediting an opposing side by calling it fake has risen up in online communities with an astonishing vigor. Party lines and ideological lines both share this mentality of a trying to tear down arguments of one side or the other as fakery.  One just has to view the news to or visit any scientific debate to hear the rhetoric, from political, the Apollo moon landings, to the theory of evolution. Anything people disagree with to any extent has online propaganda targeting it as fake.

When it comes to acts of violence it is now assured every instant will have a social media voice speak out and call it fake and a false flag attack. Everything now has its own conspiracy following and movement behind it, and the latest events in London are no exception. However what seems to be new in my perspective is that the Islamic community are now embracing and propagating these events as conspiracy false flags against them, in order for the governments to garner support and justify discrimination and anti-Muslim political agendas.

Conspiracies have a strong appeal to some people, probably ever since the JFK assassination there has been a pop cultural demand to find a deeper secret then what the mainstream media gives. JFK was probably the biggest conspiracy theory event up until 911, which then sparked more conspiracy theories and criticism then any other event in history. Many films, documentaries, books, articles and an untold number of blogs and social medial shares have circulated about various 911 false flag and conspiracies.

The most famous film series about the 911 attacks is probably Loose Change, produced from 2005 to 2009. The film makes many conspiracy claims relating to aspects of the events on September 11. Some of the talking points in the films make sense, but others fall flat and are easily discredited or have been debunked. It makes one wonder what was the actual goal? The original version was produced for only $2000 US dollars and was released for free. A 2nd edition was produced for $6000 and was released on DVD. Reports are most of the copies were given away, but at least 50,000 were sold. Amazon currently sales and rents the movie with the online streaming services for a charge of $9.99 to buy. If the price for the original DVD was the same, and we assume a modest net profit margin of 50% then that would have still produced at least a profit of a quarter of a million dollars for a $6000 dollar investment.

I’m not going to assume that the intent of the original iteration of the Loose Change films was profit motivated. The author Dylan Avery made it on his laptop and probably was convinced himself his arguments were good, but many points would later be debunked by various sources and enthusiasts. However in the end the film was remade and did produce a considerable amount of profit for the developer and producers and I think helped spark culture that is vulnerable to the notion of Deep Conspiracy.

Now we come to the latest in a tidal wave of violent attacks since 911 and I have been witnessing an ever increasing barrage of videos and articles that each latest attack was fake. These content makers often associate the event as being a false flag by the government or some organization. From Freemasons, to the Bilderberg Group, to the Illuminati, Israel, the CIA, NSA, FBI, NASA and the New World Order, have been pointed to as the puppet masters behind every new violent event that occurs. Finger pointing towards groups that are secretive or not well known, and or people already have some criticism towards are easy marks for false flaggers to point at.

This conspiracy message then floods the comment sections of the mainstream media agencies that first report the news and those outlets that re-circulate press releases. Often the conspiracy comments outnumber the other comments and many are supported by like minded responses and likes driving the narrative of the comments section to be strictly one sided towards the conspiracy theories. Questioning or attempting to counter the claims on the comments often leads to being berated by the false flaggers for criticizing their claims.

What about the latest London attack on June 3rd 2017? Within hours of the news agency reporting the news the false flaggers were already churning out content in attempts to prove it was a hoax. The primary claim comes from a photo of a dead terrorist and comparing it to a video of police officers changing on the street after responding to the scene. 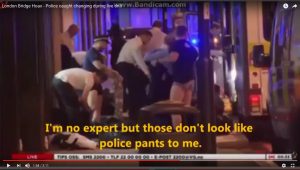 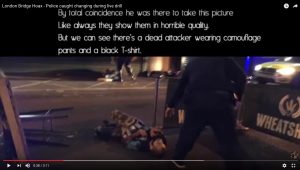 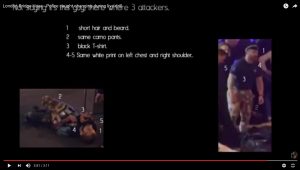 In this final screenshot of the video we see the creator has made a composite of the two sources and put them side by side and then noted the hair, the ammo pants and t-shirt and claims they are the same. The police officer changing into his clothes on the right and the dead terrorist on the left. They are not the same, clearly! They are similar but they are not the same. Every aspect of the similarities noted by the creator are clearly not the same when looked at closely.

If it is so obvious these two are not the same then why would the creator of this false flag video make such a ridiculous claim? Fame? Profit? Hubris? Misinformation? All the above? Often just a bit of analysis and research and one can find holes in these false flag claims. The problem is that the ones that point out the flaws are in a minority to the overwhelming number of those supporting and spreading the misinformation. The hoax is that that those claiming the event to be a hoax, are they themselves the ones making the hoax and creating the fakery.

There are many ways to profit off of online media. YouTube allows channels to place advertising in the creators videos to earn money. The creator can also add links to affiliate sources to get money when someone clicks on a link from the article or video description. Large channels and faker names have gained millions of followers and can gain revenue from peddling t-shirts, coffee mugs and other branded merchandise. If you can get enough people to watch your video or share your article or go to your web page you can always make money.

Considering the cultural appeal for conspiracies and the profits large numbers of visitors can generate, it is no wonder that every event is quickly turned into a hoax and false flag. It’s about the money. Every event is sure to create a spike in revenue for these sources, but they can only capitalize on it if they can create a narrative of conspiracy, because that is what they do and what their visitors are looking for. Never do these sources call out such an event as, it just happened the way it was reported. There is ALWAYS a deeper secret cover-up.

I find this sickening, as in the case with such events where such tragedy has cost the lives of innocent people. That there then large numbers of profiteers that seek to not only capitalize off the death and grief of others, but to rub salt in the wound they make claims the people who died were not even real, they were actors and that nobody got hurt. One of the most disgusting of these is that of Sandy Hook Elementary. One doesn’t have go far to find the claims that the 20 children killed were not real.

Many social sites and search portals such as Google have recently been pulling advertising dollars from these sites. I’m on the fence if this is a good thing or not. My heart says “yes pull and censor them”, my head says “lets be careful on how far we go with censorship.” I think we just need to all be very critical when it comes to those claiming events to be hoaxes. See the click herding for what it really is. And we should speak up and expose the fakers whenever we can, so that others see that there is just not one side to the story. Sometimes people do mean stuff to others, no secret agenda required.